Our inaugural track day took place on 9th Feb at the Wales Velodrome in Newport.  After some interesting discussion with the Sat Nav we eventually got to the Velodrome to catch a look at the session before us.  The first thing on most peoples mind…bloomin heck that is steep!  To be honest the photo’s that have been taken do not do the steepness justice.

So when the last of our group turned up just before the start (blaming some poor old dear on a roundabout for their tardiness we clip clopped our way to track side with a few slips on the way.  Thankfully no one fell at this point.

And so it started.  The coach was excellent, putting everyone at ease and describing some of what can happen if you do something silly like stop pedaling.  Instruction was clear and easy to understand.

So we ventured out gingerly holding onto the rails before setting off for a few laps on the concrete to get used to slowing and accelerating then it was onto the Cote d’Azure (that is the white strip on the inside for you non-trackies out there) gradually building after a few laps to the black line.  Then we started to get higher, first the red line, then the blue line and finally a metre from the barriers!  After a shaky start, and getting over vertigo, people found their confidence and before long were flying around.  One thing we noticed was the air.  It is dry, and I mean dry!  Also if you wear contacts or suffer from excessive eye water then glasses are essential.

The coach was impressed at how confident and fast we were going for beginners so we moved onto sprints, this was in a word exhausting, from the front you had to sprint around to catch up the caboose of the group who are going a fair lick, everyone had a great stab but the 2nd and 3rd sprints were to much for most of us.

Now we have all seen track riders go from the front to sweep up high on the corner to join the rear of the group or ‘Changing in track parlance.  This is not as easy as it seems, push to hard and you end up at the same speed or worse barrel of the corner faster than your team mates and close at a rate of knots with the last man, remember no brakes, thanks to our friend inertia!  Both groups did well and nailed it though, some great photos taken by Gloria!

Finally a flying 500 sprint. The aim, 1 lap to get up to speed then blast as fast as your oxygen deprived lungs and screaming legs could carry you.  I can’t remember all the timings but Mr D Devine came first in 37 something seconds.  To give a bit of objectivity Chris Hoy does the 500 in 22 Seconds from a standing start! 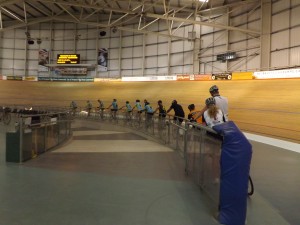 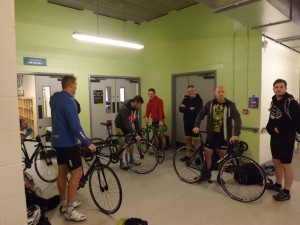 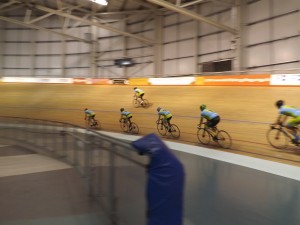 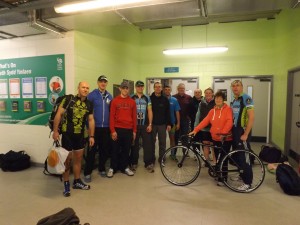 This entry was posted in Club News, Social. Bookmark the permalink.